To better understand how the muscles and tissue structures in the feet, ankles, legs and hips are adversely affected by overpronation, imagine a person on the end of a bungee cord jumping off a bridge. If the bungee cord gets the right amount of tension on it as the person nears the ground, then he or she will be saved from smashing into the earth. However, if the bungee cord does not pull tight because it is twisted or has no elasticity, then the person will impact the ground with dire consequences. The muscles, tendons, ligaments, and fascia of the legs and feet are the body's bungee cords. If these bungee cords work together, they can protect the joints of the feet and ankles from excessive stress, and prevent muscle and tissue damage caused by overpronation. If they do not work properly, a person will be able to see evidence of this in the feet and ankles, particularly in the alignment of the joints.

There are many possible causes for overpronation, but researchers have not yet determined one underlying cause. Hintermann states, Compensatory overpronation may occur for anatomical reasons, such as a tibia vara of 10 degrees or more, forefoot varus, leg length discrepancy, ligamentous laxity, or because of muscular weakness or tightness in the gastrocnemius and soleus muscles. Pronation can be influenced by sources outside of the body as well. Shoes have been shown to significantly influence pronation. Hintermann states that the same person can have different amounts of pronation just by using different running shoes. It is easily possible that the maximal ankle joint eversion movement is 31 degrees for one and 12 degrees for another running shoe.

Not all foot injuries affecting runners are necessarily down to a particular running gait; it is rarely that simple to diagnose how a foot problem developed . Simply being an overpronator does not mean that a foot injury has been caused by the running gait and it could be due to a number of factors. However mild to severe overpronators tend to be at a higher risk of developing musculoskeletal problems due to the increased stresses and strains which are placed on the body when the foot does not move in an optimum manner. The following injuries are frequently due to overpronation of the feet. Tarsal tunnel syndrome. Shin splints. Anterior compartment syndrome. Plantar fasciitis. Achilles tendonitis. Bunions. Sesamoiditis. Stress fractures. Back and hip pain. Ankle pain.

If you have flat feet or low arches, chances are you overpronate. Although not always the case, the lower your arches the greater the overpronate. Stand on a hard surface (in front of a mirror if you need to) and look at your feet, flat feet or low arches are easy to spot. If your feet look flatter than a pancake, have a look at your ankles and see if they seem collapsed or straight. If they are, you're overpronating. 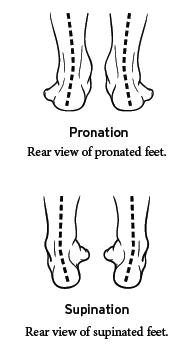 Solutions typically presented will include physical therapy sessions, prolonged prescription drug regimens, occasionally non-traditional approaches like holistic medicine and acupuncture. These options can provide symptom relief in the short term for some patients. However, these treatment methods cannot correct the internal osseous misalignment. Ligaments are not effective in limiting the motion of the ankle bone when excessive joint motion is present. Furthermore, there is not a single, specific ligament that is "too tight" that needs to be "stretched out." The muscles supporting the bones are already being "over-worked" and they cannot be strengthened enough to realign these bones. There is no evidence to suggest that any of these measures are effective in re-establishing or maintaining the normal joint alignment and function.

Subtalar Arthroereisis. Primary benefit is that yje surgery is minimally invasive and fully reversible. the primary risk is a high chance of device displacement, generally not tolerated in adults.

An implant is pushed into the foot to block the excessive motion of the ankle bone. Generally only used in pediatric patients and in combination with other procedures, such as tendon lengthening. Reported removal rates vary from 38% - 100%, depending on manufacturer.
« Recovery From Hammer Toe Correction Sur… Dealing With Bunions »
Profile

Login to quote this blog

You cannot quote because this article is private.